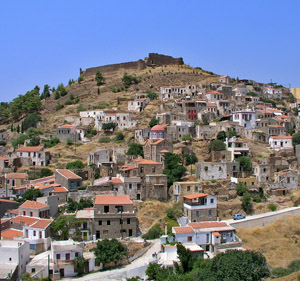 Volissos is located North west, about 40km away from the capital of the island and has a long history.

At Volissos, according to Thucydides, there was once an ancient Aeolic city, and the rumor that it was the birthplace of Homer is still a legend told.

On the top of the hill was built a castle in the medieval times. The Byzantine castle has a trapezoid shape with six circular towers. Inside the castle there were several buildings, cisterns and churches. There was also a tunnel connecting the castle with the seashore and the Pithonas district.
Volissos is the biggest village in NW Chios mountaineous area – and it’s the capital of Municipality of Amani.