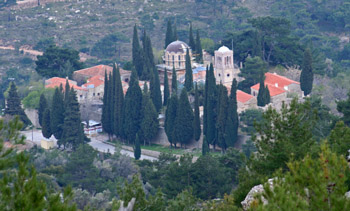 (New Monastery) is a monument of international significance. The catholicon (main church) is the most important specimen of the insular octagonal domed type of church and is lavishly decorated with marble revetments and mosaics. Nea Moni was founded in the middle of the 11th century, with a donation of the emperor Constantine IX Monomachos and his wife, Zoe.

For many centuries it was the most important religious center on Chios but was repeatedly destroyed in the 19th century.

Nea Moni was plundered by the Turks in 1822 and was severely damaged by an earthquake in 1881.

These caused the collapse of the dome, the belltower, the apse of the sanctuary of the catholicon, as well as the destruction of many mosaics. Recently has undergone restoration and preservation of the mosaics. There, is also found the very interesting Nea Moni Museum. Nea Moni is the most famous sample of medieval monasteries architecture in the whole Aegean islands.